Over the past two decades, digital media have transformed the way numerous professions operate. There is nearly no industry one can think of that has not utilized social networking platforms, web pages, and digital communication tools to advance in terms of audience and impact. Creative and cultural practices are among the professions impacted by technological disruption. In the past, to visit a museum collection or take a tour of an exhibition, you would need to go physically to the exhibit location. In Yemen, museums, galleries, and exhibition spaces are few in number and are exclusively centered in main cities such as Sana’a, Aden and Hadramout. The distribution of public cultural institutions where heritage material is kept and displayed is limited and has grown to become even scarcer since 2015. So what happens if museums close because of the global pandemic? Or impractical exhibiting space? Or security concerns?

Historians and cultural advocates have continuously called for interventions to safeguard Yemen’s tangible and intangible cultural heritage over the years. But the problem is rooted in the negligence and carelessness by the relevant authorities. Moreover, the centralization of archives behind abandoned and closed museum doors and government buildings – where the keys are nowhere to be found – has made it even more complicated for non-governmental organizations and independent initiatives to take any action. However, looking beyond the state-controlled archives, Yemen’s cultural heritage is scattered all around, in the memories of elders, in family photo albums, in diaspora letters and war diaries. Digital archives can function as explorative tools for uncovering undermined areas of our cultural heritage through individual accounts of inherited or lived experiences. They also have the potential to function as a documentation tool for items in danger of loss, theft or damage. A medium to document and reimagine the archive to become knowledge sourced by the people, not only about them.

Public cultural institutions are an important resource of historical, societal and cultural accounts of our past communities, which belong to the public and should be made available as a source of information to everyone. The marriage between technology and cultural heritage has produced a new concept that enables archives to be more accessible and mobile. According to the UNESCO’s Charter for the Preservation of Digital Heritage, the term digital heritage refers to two different concepts: one concerned with content generated using digital platforms by individuals reflecting on their personal experiences and respective communities. For instance, this article and this platform are going to be accounted for as digital heritage items for future generations; and one looking at items that exist in analog formats and then are run through a digitization process to make them available in a digital format online or offline. In this article, digital heritage refers to the latter definition, which focuses on the process of transforming analog cultural heritage into digital.

What Do We Gain from Sharing Heritage Digitally?

There is an opportunity for local independent initiatives and private institutions in Yemen to collaborate and find innovative ways of employing the digital space to enhance accessibility and preservation of historical material. Luckily, there is a growing interest in cultural protection in the Yemeni sphere. The potential of digital-based projects is starting to manifest; particularly, the focus given to the preservation of cultural heritage and archives in conflict areas, where non-physical documentation begins to be a necessity.

Today more than ever provides a timely opportunity for digital-based platforms to prosper and for traditional institutions to innovate, diversify and adapt. For Yemen, conflict and immobility have destroyed the tourism and culture industry. Yemen’s heritage is no longer celebrated; rather, it is ransacked and looted by armed conflicts, hit by airstrikes and damaged by floods caused by climate change. While is it important to encourage local authorities and communities to take action to restore damaged cultural heritage and safeguard that which is under threat, it is also necessary to think of new mediums to document and promote the country’s heritage.

Digitizing cultural heritage is one way to construct platforms enabling access to information that is not usually reachable. The availability of open-access digital spaces will provide people with convenient access to archival material anywhere with a screen and internet connection. One advantage is expanding outreach to the Yemeni diaspora as they will be able to reconnect and contribute to these projects. Building bridges with the Yemeni diaspora brings more richness to our heritage as it explores different perspectives on migration, communities and political ideologies in distinctive geographical locations during remarkable historical eras.

Heritage is no longer a static concept: contemporary artists are now engaging with heritage aiming to reintroduce, visualize or rethink history. If you keep an eye out for artwork produced by emerging artists in Yemen, you might notice that many artists utilize traditional elements and folklore in their artwork. Therefore, artists and researchers are among the primary beneficiaries of the availability of heritage databases and digital archives. But the most important part about digital heritage projects is that they do not exist behind a paywall or institutions (e.g. universities and research centers), and are instead built to be accessible to everyone.

What Should We Keep in Mind Regarding Digital Heritage?

When thinking of digitizing cultural heritage in Yemen, many challenges are bound to arise. Some difficulties might occur at the execution end and some at the delivery end. Digital heritage is an area hardly explored within Yemen. Hence, capacity building from professionals in the field is a fundamental requirement in order to form teams equipped with sufficient skills to transform analog to digital. The process entails thorough research, knowledge of digitization methods and tools, documentation, sorting, legalities and publishing. Therefore, digitization initiatives require teams with interdisciplinary expertise in research, technical skills and management, as well as the availability of necessary equipment. Issues of geographical and gender representation are also crucial to establishing platforms that discontinue stereotypes and division rather than reinforce them. Gender representation is a concern for visuals-oriented publications; Yemeni women’s imagery online could be purposely unselected for display, particularly when dealing with family archives. Moreover, the complexity of travel to different cities across the country (even in the pre-pandemic era) made it a complex hustle to have one central team travel around in search of material to digitize, thus excluding content that exists beyond the central cities from being represented.

Digital tools should not replace institutional and governmental responsibility in protecting the countries’ cultural heritage. Efforts from independent initiatives can generate excellent outcomes. However, we need local authorities to cooperate and allow professionals to access cultural heritage material behind government doors, such as radio and television archives which have been covered in dust for years and which face destruction threats.

Initiatives that Are Working to Make Cultural Heritage Accessible

Yemeni collections of handpicked digitized material have appeared on the databases of a few international universities as a subdivision of larger digital heritage and library departments. Yemeni manuscripts are the main area of focus for some universities in western countries. The University of Leiden digitized around 150 items that were made available under The Zaydi Manuscript Tradition project in September 2020. The items are a collection of manuscripts dated between the 17th and 20th centuries. A similar initiative was carried at the University of Princeton along with partners from Germany and the USA under the name The Yemeni Manuscript Digitization Initiative, documenting and digitally preserving three private libraries in the capital city of Sana’a – a total of 236 manuscripts between 2010 and 2013. Those projects fall under niche interest in Islamic history and religious texts in northern Yemen.

At a local level, Yemen Archive, an independent platform launched in 2017, focuses on digitizing and publishing literary work written by Yemeni authors or work produced about Yemen. Books published on the platform included encyclopedias, poetry, novels, cultural studies and biographies. Also, the project launches an android app that provides access to the archive content through mobile phones. Another in-progress Yemen-based digital heritage project is called Jamakaneh, a digital heritage space that aims to utilize technological solutions to archive and display historical items through an open-access online platform by Basement Cultural Foundation. Preliminarily, the project will focus on sourcing and collecting items from family archives. The allocated items range in format, from letters, images, notes, illustrations and manuscripts. The targeted families reside in Sana’a, yet have provided further support; where realistic, the team aims to expand to other cities in central and southern Yemen. The name Jamakaneh is an Arab-Aryan phrase passed into Yemen through during the Turkish Empire. It translates to space of collecting, which is built-in as a part of traditional houses in Yemen. Also, Romooz Foundation recently shared samples of an ongoing e-journal digitizing project focusing of cultural journals dated back to the 1940s. The organization to hold the first public discussion about the project in December 2020.

It seems that the future holds more possibilities for cultural digital-based projects to take place in Yemen. Eliminating physical barriers allows local cultural practitioners to create partnerships, obtain funding, undergo training and exchange expertise in their practical domains. Although delivering digital projects for the audience in Yemen remains difficult as the vast majority of internet users battle absent or interrupted internet connections and poor technological infrastructure. These platforms will remain a valuable source of reference to diverse areas of Yemen’s cultural heritage to develop new artwork and scholarly and creative content that revives and continues to remember Yemen as an iconic historical treasure.

1- Cover of Al-Hekmeh, a Mutawakelite magazine established since the early ’20s as an heir to the Ottoman-Yemeni Magazine « Sana’a ». This sample is almost 90 years old. It is noted that there are some sketches on the covers; could be an indicator for the shortage of writing

2- (Front) a message between two brothers, describes usual routine and life, and how Hitler has taken control of Paris in World War II by avoiding the French Ligne Maginot. Dated 1940 based on the event. (Back) different poetry verses for different poets, the back of the paper has been used as a sketchbook.

3- A British colony notebook that has been transferred to the Mutawakelite Yemen for the pupils, it has different childish drawing and other Arabic grammar lessons. Estimated at the ’30s. 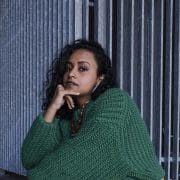 a graduate student in Journalism, Media, and Globalization by day. She carries a background in technology management and a drive for cultural and artistic projects. Her particular interests are ideas and people- who work on combining digital tools and multimedia platforms to produce distinctive content, share information, and foster cross-cultural engagement. In 2019, She worked at Dar El-Nimer for Arts & culture where her understanding of the cultural scene in the MENA region was advanced, working with a team of professionals in collections, curation, media and outreach. By night, she works with Basement on international partnerships and outreach projects and looks after the Jamakaneh digital heritage project. Previously, based in Yemen, Lebanon, the USA, Qatar, and currently based in Denmark.