A play entitled ‘Yemeni Movie’ was presented by Yemeni youth in Sana’a’s Cultural Center on 28 October 2017. This performance marked the revival of Yemeni theater; embodied with fresh, youthful ideas, the play boldly depicts the war in Yemen and its effect on people.

The play revolves around a young man trying to produce a movie with his friends, and tackles the problems Yemenis face during the war. Well-known musical pieces played in the background, while traditional Yemeni clothes and dialects were used in every scene. Although the intention of this burlesque play was to create absurd comedy, it also signaled clear messages to the audience. 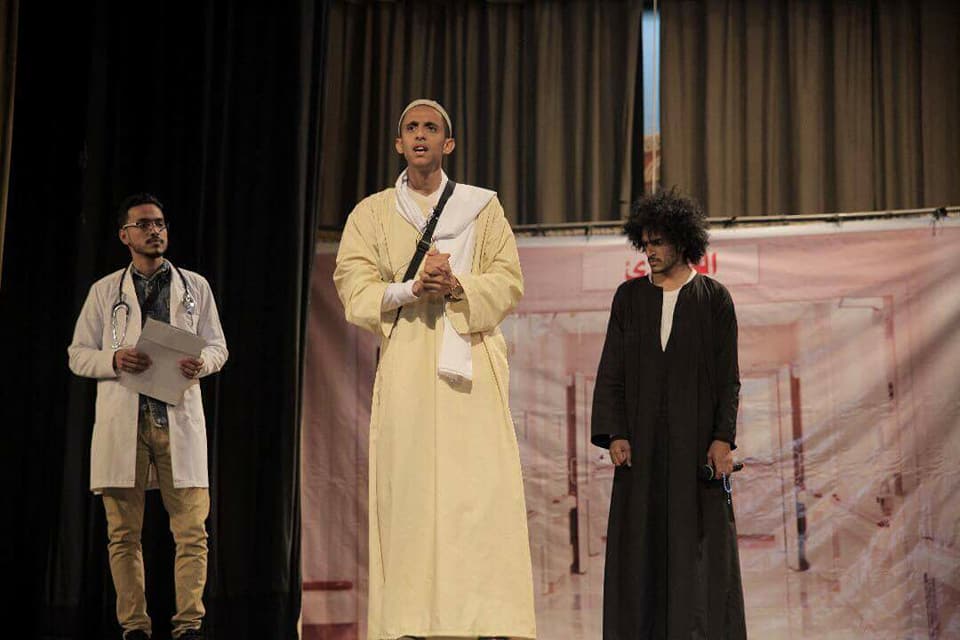 The play was written by Mohamed Khaled, a media graduate, screen writer, and co-founder and presenter of local radio shows. Commenting on the play, he said: “I included artistic aspects filled with irony which played well with the audience. I tried to portray their emotions and issues in a satirical way since we’ve grown accustomed to tragic news.” He continued, “because of this state of depression, I decided to write a play in order to inspire other writers and push them out of their despair caused by this war. I needed someone with a managerial background, so I presented the play to Naif al-Nijm, a young business man who cares about art. He decided to produce it immediately; now we’re looking into the possibility of producing more plays if we receive more funding”.

Khaled decided to direct the play he wrote, because professional directors only work with funded plays, and dismiss unfunded projects. The actors were cast during auditions, the most tedious period. Directors usually choose actors based on recommendations instead of holding open auditions, because it is time consuming and tiring. One hundred and ninety-seven actors auditioned for the play, ten of whom were women. Khaled noted the low-level of women’s participation, saying “Women face a lot of social barriers when they become artists. While our society doesn’t criminalize art, it deems it unnecessary entertainment”. 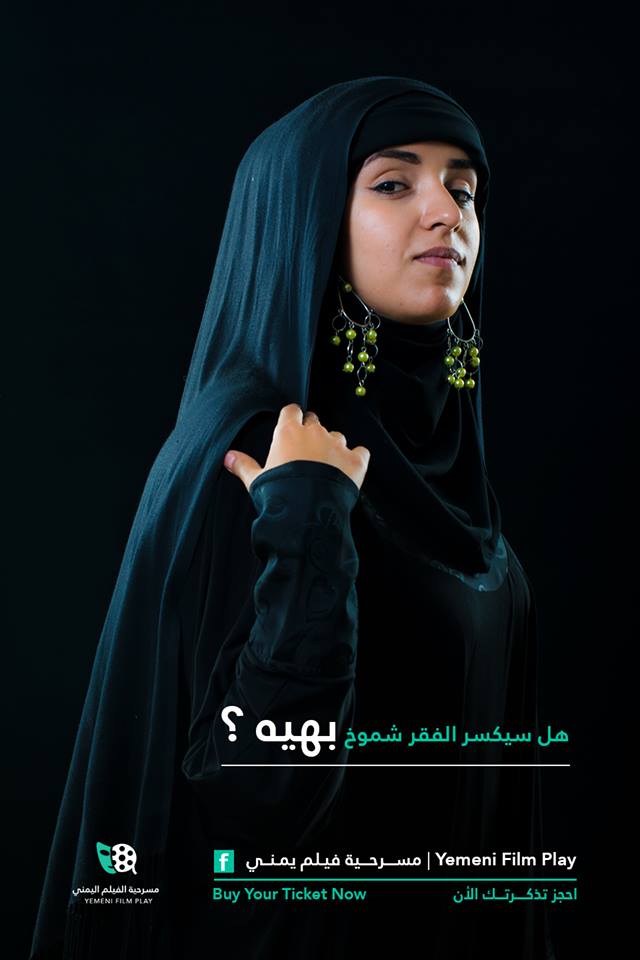 The play deals with issues created by the war and which face Yemeni society, such as price hikes, the arms trade, people-in-need not receiving aid and opportunists who exploit the situation, making it unbearable for normal citizens. The play could be considered an artistic representation of the situation in Yemen, but with a comedic twist, and a debate-invoking plot. Khaled says, “Art should embody people’s problems and issues, and no-one can tolerate this situation anymore. If artists don’t express these issues, then what’s their role?” The play looked at the difficulties of making movies in Yemen, focusing on factors necessary for success, such as team work, finding new funding sources, and the use of technology to market and connect with people.

Khaled says, “A lot of young talented people have ambition and the capacity to produce art, but they are busy making ends meet because of the poor state of our economy. Some sell household items to produce small artistic ventures. We need support to get the best out of them”. On making movies, Khaled adds, “There are no cinemas in Yemen, and television broadcasters are very uncooperative because they have a monopoly on the market. They buy work from young people for very low prices. Furthermore, the viewers have a very negative view of local movies, as theater is considered buffoonery”. 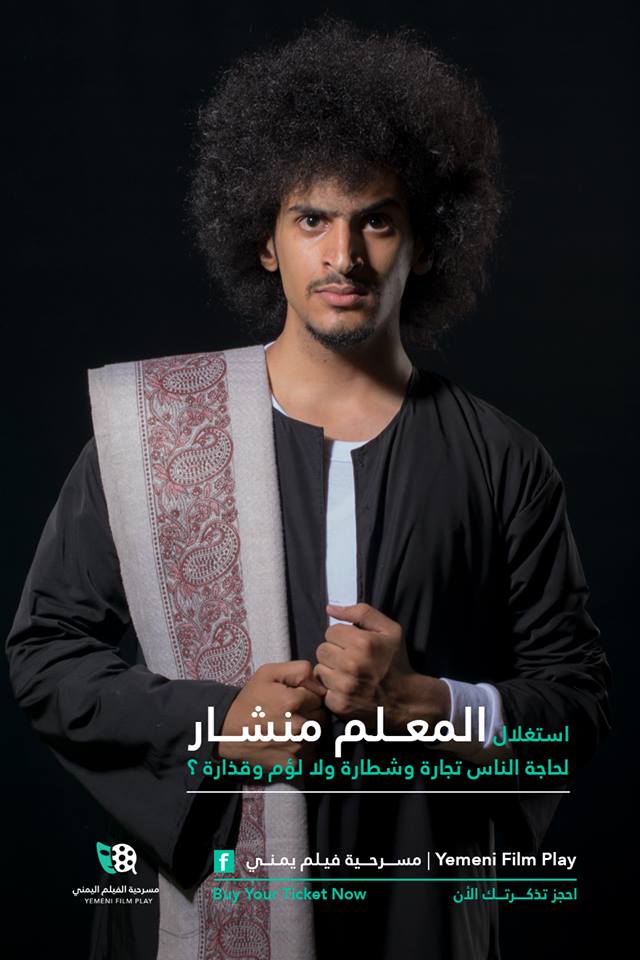 Khaled believes that ambitious young people haven’t found opportunities to produce their work. In Yemen, this kind of work is seasonal and a small number of production companies monopolize the market. He also believes that funding is not the only problem upcoming artists face: “Artists in Yemen require training, as there isn’t a specialized art training institute in the country.” Khaled participated in an international screenwriting training course while he was working on one of his radio projects, which was very helpful. This made him appreciate the importance of training, and so he started raising awareness about its importance with other artists. He recognized that enthusiasm alone isn’t enough; art is a craft, not only a hobby, and this entails artists’ building their capacity.

What made this play special was the appropriate casting, according to actors’ abilities, some of whom were making their debuts. Eight actors were hired through auditions for this play, six men and two women. Khaled says, “I was worried at first because some of the actors are newcomers, but they played their roles brilliantly. If we had an art institute, we wouldn’t have had to look for amateurs”. The actors participated enthusiastically because the plot resonated with them and their problems. Khaled invited some production companies to give actors more work opportunities. Two actors have managed to land acting jobs in an upcoming television series. Khaled says, “We don’t want to have a monopoly on talented people; we just started and are not looking to compete with anyone. My main objective is to build the capacity of youth and elevate Yemeni art”. When asked if he would start a theater group, Khaled replied, “If we stay together, I’ll try to get funding for them to go on training of trainers outside Yemen, so they can come back and train other talented people. My goal is to build their capacity and help them do the same for others”.

The play portrays artists’ biggest hurdle, finding funding for productions. It resolves this through producing, directing and filming small performance pieces, by any available means, then publishing them on YouTube and other social media platforms, which attracts producers if they are interested in the work. Khaled didn’t ask for funding from official entities, as he knows what the country is going through. He won’t receive government funding for art, if it is struggling to pay wages to official employees. In his opinion, however, he thinks the government should support artists. He also believes that international cinema succeeded through private funding from business people and institutions, not only from the government. This gives artists more creative freedom, away from fulfilling political agendas.

On his fears during production of the play, Khaled says, “I was afraid that the producer would pull out in the middle of the project, but it never happened”. One of his other fears was that the Cultural Center would not host his show as it is the only fully equipped theater in Sana’a; however, the play was hosted without alterations. He elaborates on his concern: “Some people don’t want others to be heard. They love this country, but should be aware that other citizens love our common home differently.” 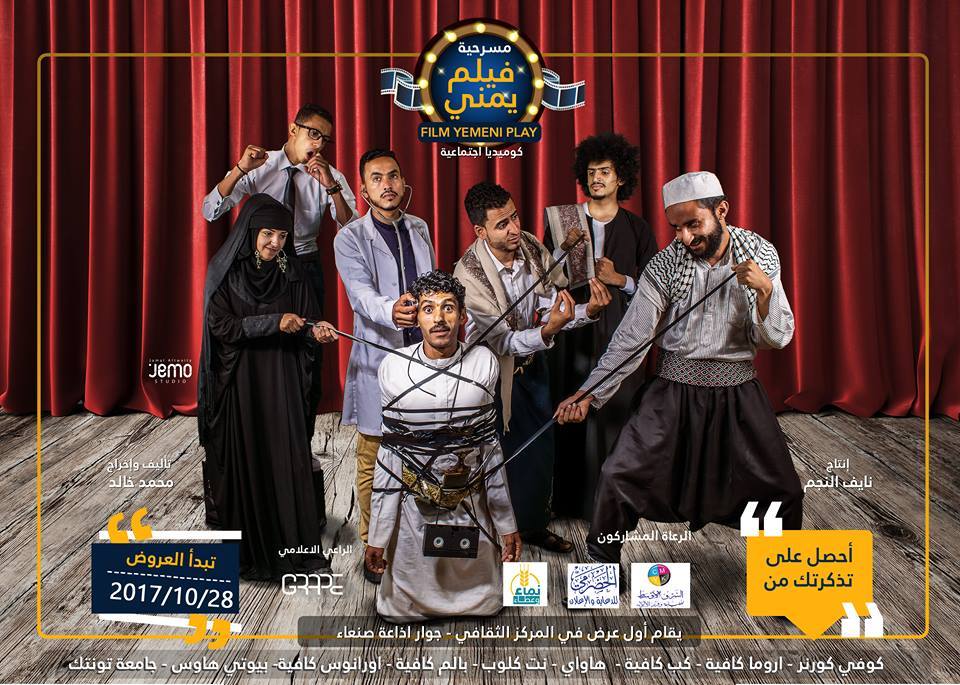 Has theater’s role in Yemen reached an impossible obstacle? Khaled answers, “Theater never loses importance and visual art never dies, people always care about content regardless of the presentation means. But the situation in Yemen marginalized all forms of art, even in the National Dialogue Conference there were no artist representations, and artists are absent in decision making positions. In public events, artists are hosted only to provide entertainment, ignoring the importance of art’s role in creating opinions, portraying social issues and making change”. Khaled called on artists to professionally and methodically create art through proper studies, planning, preparation and training. Yemen has deficiencies when it comes to art institutions and equipment, which calls for capacity building in all aspects if true art is to be created.

Mohamed Khaled had fears that the audience wouldn’t take his work seriously because no famous actors were involved, but the feedback has been encouraging, whether it was from the audience in the theater or through the support people showed in social media. Khaled talked about the feedback from artists, saying, “I was worried about producers not accepting work from a screenwriter directing his first play, but I was overcome by their support and motivation”. Khaled ended the interview saying, “We proved that young people are capable of producing art without official funding. While ticket returns couldn’t cover production costs, the play was a success because of our teamwork – the secret being, everyone believes in the role of the arts, and its ability to invoke societal change”. 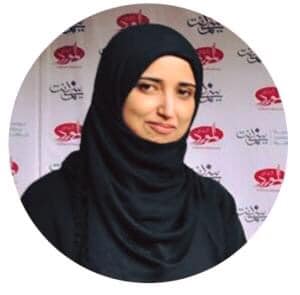